The olive tree, an emblem of the Mediterranean landscape, lives in the rocky and drylands of Provence but also of Greece, Italy, Spain as well as in North Africa, Asia, Australia, and New- Zealand. It is a tree whose gray trunk likes to play contortionists, which gives it that original look. Resistant, its southerner temperament prevents it from surviving temperatures below -10 ° C. "Slowly but surely" is the motto of the olive tree.

In the Mediterranean basin, the olive tree (Olea europea. L) constitutes the main fruit species, both by the number of varieties cultivated and by the social and economic importance of its culture and its environmental role.

So as we said the olive tree has undeniable economic importance by the production of olives from which we extract oil, it also has ecological importance where we will be interested today.

From an ecological point of view, the hardness of the olive tree explains its expansion, on a large scale, at the level of the Mediterranean basin and shows that this tree has been able, over the centuries, to adapt to the fluctuations of the Mediterranean climate known by its cold and rainy autumn, in general, it's hot and dry summer. Similarly, the geographical distribution of this species is not limited by the nature of the soil. This makes it “the rich vegetation of poor soils”' and thus classifies it among the great protectors of the environment.

There are certain specificities of the olive tree that are behind its ability to adapt to changes in environmental conditions among which we find :

The persistence of its leaves, olive trees do not completely lose their leaves in autumn since they are renewed on average over the course of 3 years; therefore it is one of the trees capable of maintaining its greenery and its natural beauty despite the succession of the four seasons of the year.

Likewise, the leaves are characterized by the presence of covering hairs which help to conserve humidity. Moreover, its dense and persistent foliage gives it a great capacity for absorption of carbon CO2.

Without forgetting its foliage, widely deployed, can reduce the intensity of torrential rains and fight against erosion since it facilitates the runoff and the infiltration of water into the soil.

An olive tree root system is robust and characterized by an important development that manages to fix the soil, fight against erosion, and draw water in depth. Likewise, this root system is endowed with great adaptability to different types of soil since its development is strongly influenced by the physicochemical characteristics of the latter and by its structure and texture. 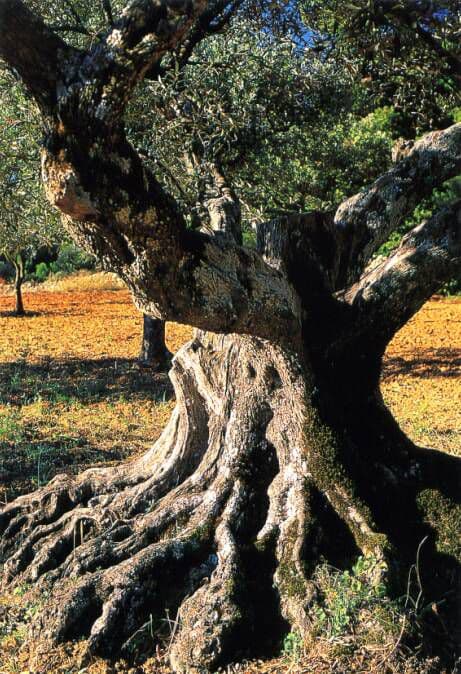 The olive tree is one of the least water-demanding plant species. About 80% of the world's olive groves are cultivated in dry conditions for subsistence and production. Thanks to its tolerance to drought and its flexibility of adaptation to fluctuations in climatic conditions, olive cultivation is practicable under a water regime ranging between 100 and 800mm / year. In a situation of water stress, the olive tree reacts by a marked reduction in exchanges with the outside world. it proceeds, in fact, to the closing of the stomata to preserve water in the tree, to avoid its drying out, and finally to ensure its survival.

The olive tree is a plant species that contains a great wealth and a very important genetic diversity, moreover, the tolerance to drought as the resistance to diseases and pests are among the characters strongly influenced by the variety factor.

Olive trees as ornamental trees, in particular the oldest subjects with a tormented port, are in great demand. There is a real love story between this tree and the people of the Mediterranean basin.

No tree has so many symbols: Wisdom, Longevity, Hope, Sacrifice, Reconciliation, Symbol of Life, Eternity and Victory.

The olive tree is generous: it nourishes man, warms him, enlightens him, helps him to stay in good health. This oil provided by the olive tree challenges us with the light it diffuses. It invites us to reflect on the solar symbolism that is so closely linked to the celebration of our feasts of St. John, our great daylight, characterized by the radiance, heat, and light that emanate from it.