The different models of handicrafts rugs

The different models of handicrafts rugs

Carpet refers to a type of thick fabric with additional threads on its surface, called "node". Carpets are produced around the world according to ancestral processes. They are made on looms; tools used to tighten the chain and allow knotting or weaving. They are characterized by their mass and their rigidity to wear (compression, flexion, abrasion, etc.). Their classifications and characterizations remain subjective.

It is difficult to determine where and when the first rug is made. The countries where the rugs were produced are Persia (Iran), Turkey, Central Asia, Mongolia, and China, often referred to as the region of the rugs.

Oriental rugs, depending on their origin, are fascinated by the magic of colors (primary colors, in particular, madder red and blue), the mystery of the patterns, the multitude of inspirations and influences. A utilitarian or decorative object, the oriental carpet is divided into two categories, the nomadic carpet, generally of small size, with the traditional decoration of the tribe, and the village or factory carpet. 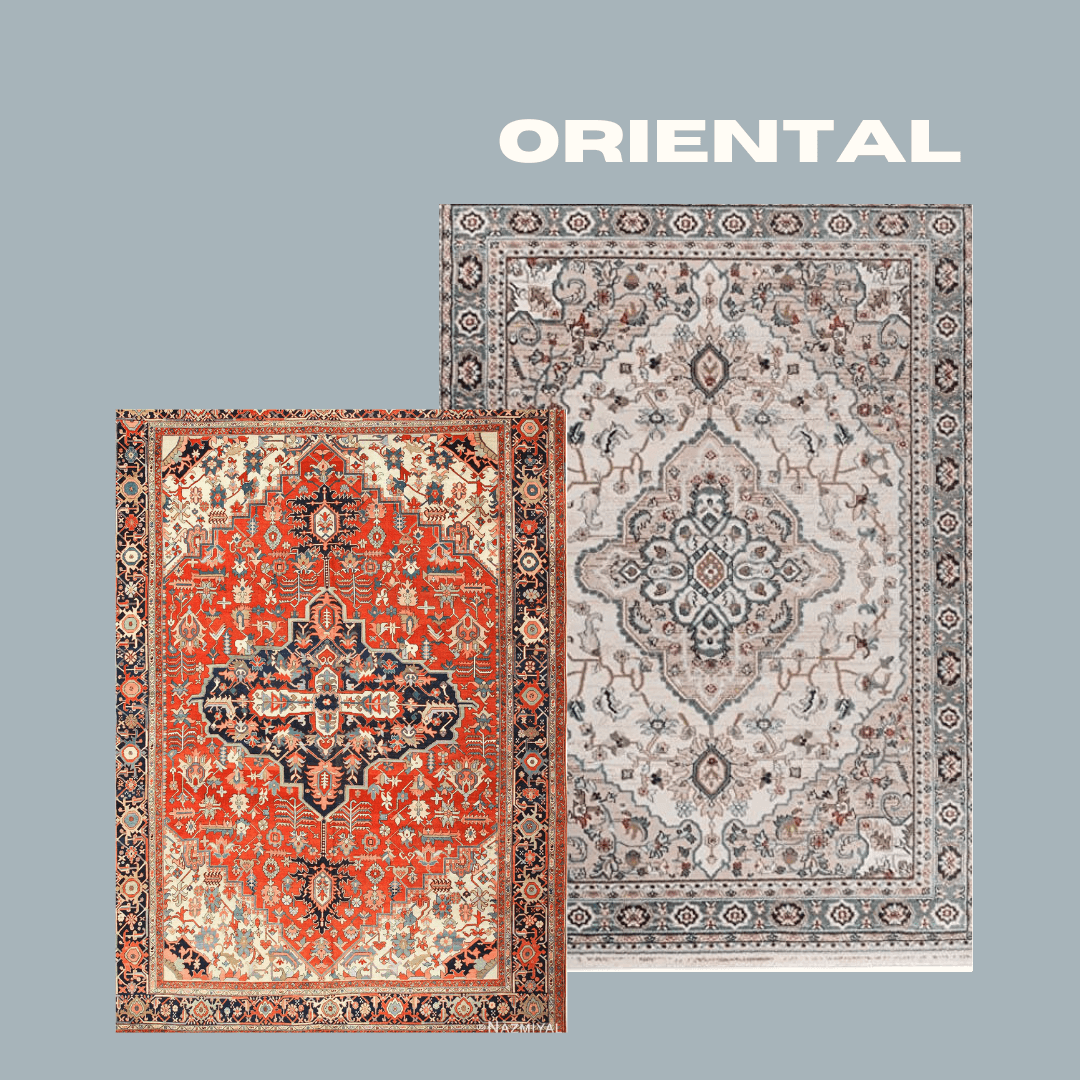 The history of the carpet is closely linked to the Turkish people, who most probably originated from the knot technique. The first known carpet is that of the Altai, dated to the 4th century BC. Turkish rugs were imported to Europe as early as the 13th century.

The Turkish handmade carpet industry has experienced a period of recession in the past decade . 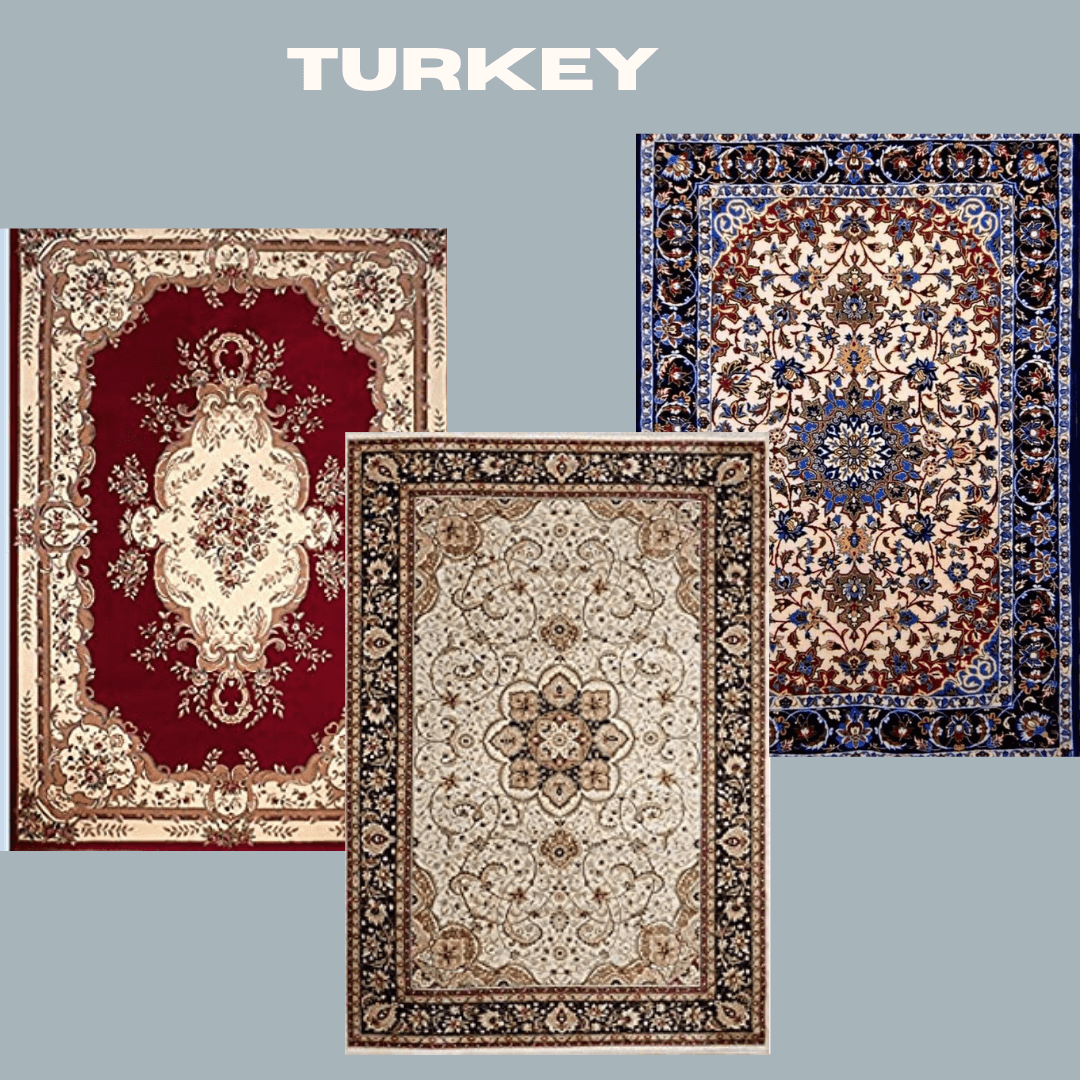 The Persian carpet is an essential part of Persian art and culture, its weaving has become an art. Carpet weaving is undoubtedly one of the most distinguished manifestations of Persian culture and art; it goes back to the Bronze Age. In Persia, the production of rugs is an art. Testimonies dating from antiquity attest to the age of this craft. For some, it dates back to prehistoric times. The brightly colored designs were geometric, with small octagons and stars.

The sumptuous rugs are used to cover the floors of palaces and mosques.

Some are kept in major international museums. The materials used for the manufacture of carpets are wool and silk, woven on a cotton weft, rarely on a wool or silk weft, sometimes embroidered with gold or silver. The Persian carpet is also characterized by its asymmetrical “Senneh” knot or the “Farsbaff” knot. 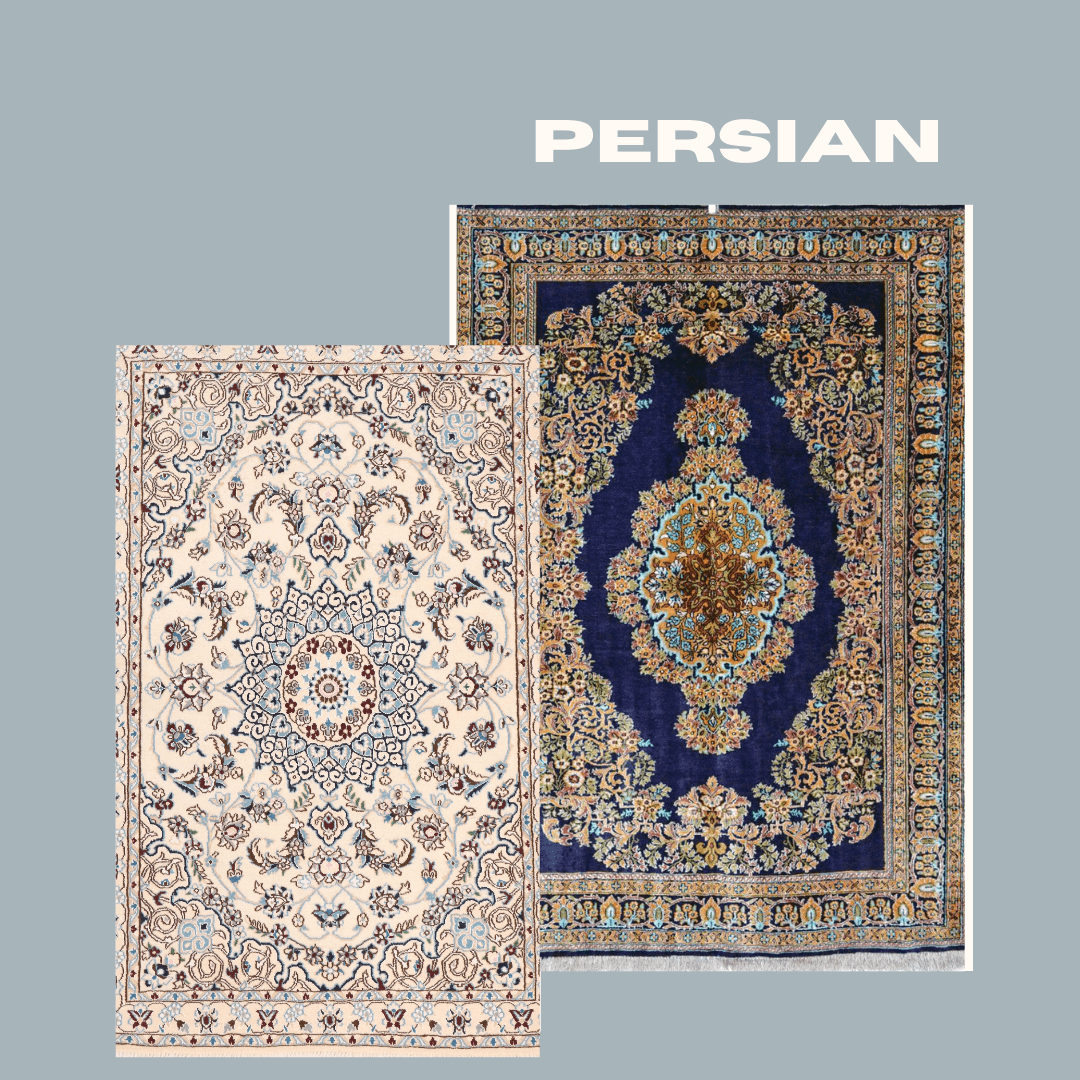 The production of rugs in Morocco is one of the most secular professions.

Currently, it constitutes a very important sector in the Craft industry and this on several levels: productivity, employment, and profitability. It remains the main product.

Each region was known for its specificity of carpet weaving. It should be noted that there are several types of rugs. This difference comes from the manufacturing technique (the knotted carpet, the woven carpet, and the mixed carpet) and the origin of the carpet (the Berber carpet and the city carpet). The royal carpet is the extract of several carpet families from the East mixed with those who already resided in ancient Morocco, it is also the association of Moroccan-Andalusian architecture with oriental art. It represents the latest creation in Moroccan carpet weaving 100% wool: warp, weft, and knots with a superb contrast of colors. 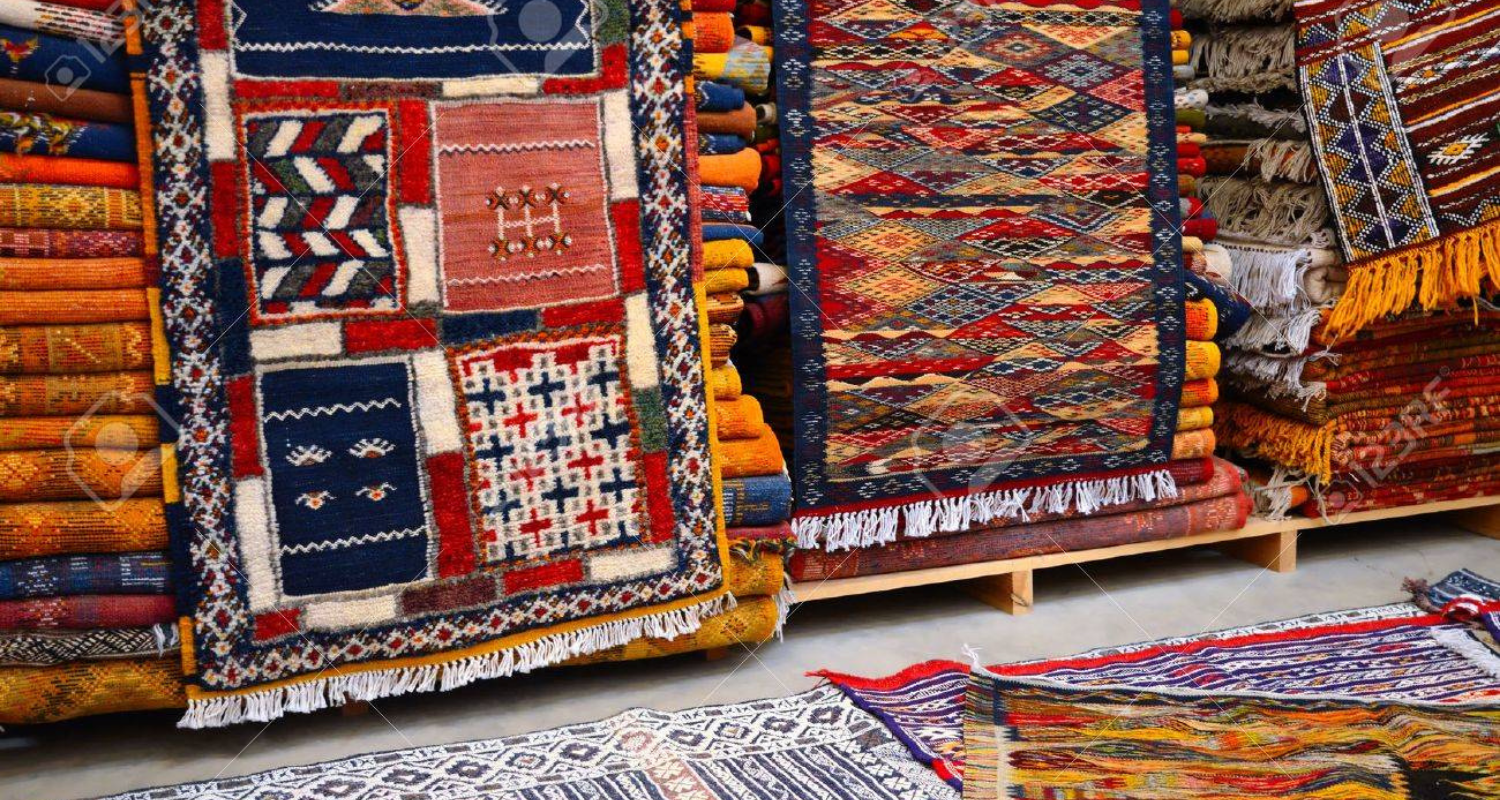 Carpets: knotted stitches from Tébessa, Guelma, Annaba, Skikda, Nemencha and Hodna, Guergour, Laghouat, Biskra, El-Oued, Mzab, Cherchell, Sour El-Ghozlane, Mascara, Tlemcen, from Djebel Amour , woven in wool, decorated with simple transverse bands or sumptuously adorned with diamond patterns in multicolored dots, Dragga or woven rugs made around the Babors, serving as a separation inside the Khaimas , astonishing compositions resulting from the conjunction of the traditional Berber decorations and the contributions of the East. 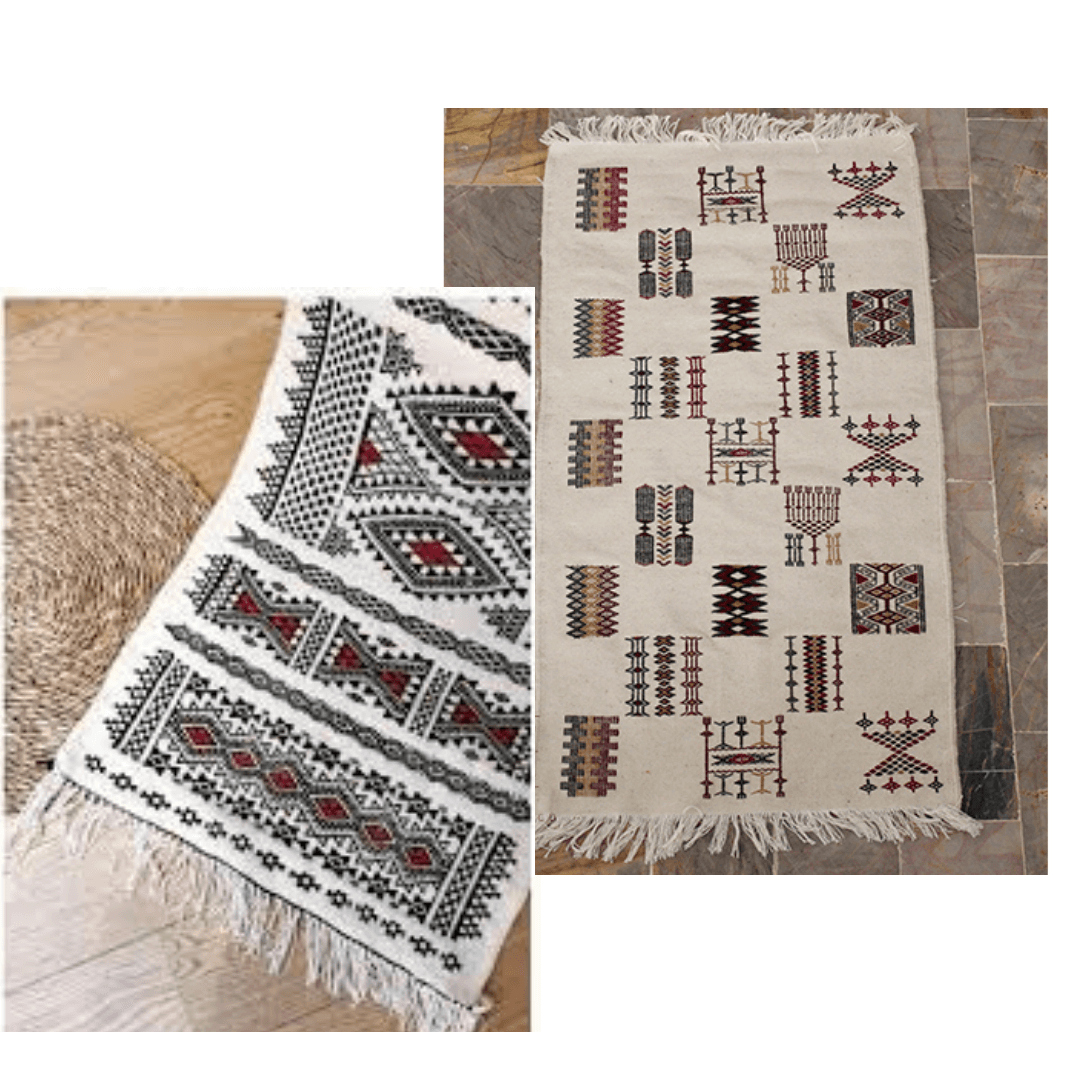 The crossroads of civilizations and land of encounters, Tunisia have always been famous for its weavings. In the 5th century BC, Greek poets celebrated "the embroidered rugs and cushions of Carthage". In the early centuries of Islam, Kairouan produced rich and sumptuous rugs that the Aghlabid princes sent to

royalties in Baghdad. Much later, the chronicles of historians and the accounts of travelers have reported the use in palaces, residences and among tribes of several varieties of weaving: prayer rugs, floor rugs, saddle rugs, hammam rugs. , sofas rugs, ...

At the start of the century, the introduction of artificial dyes and their misuse somewhat altered the quality of Tunisian rugs. This led a Kairouan family to create a new type of “Alloucha” carpet that takes up the natural palette of colors of sheep's wool: from white to black, including beige gray and brown. Tunisia has known generations of master craftsmen who knew how to delicately mix dyes while controlling the temperature of the water. The return to vegetable dyeing is a double-edged sword, at least in Tunisia. Indeed, even if its organic aspect is currently sought after by consumers, its repercussions on the ecological and environmental level are difficult to overcome. 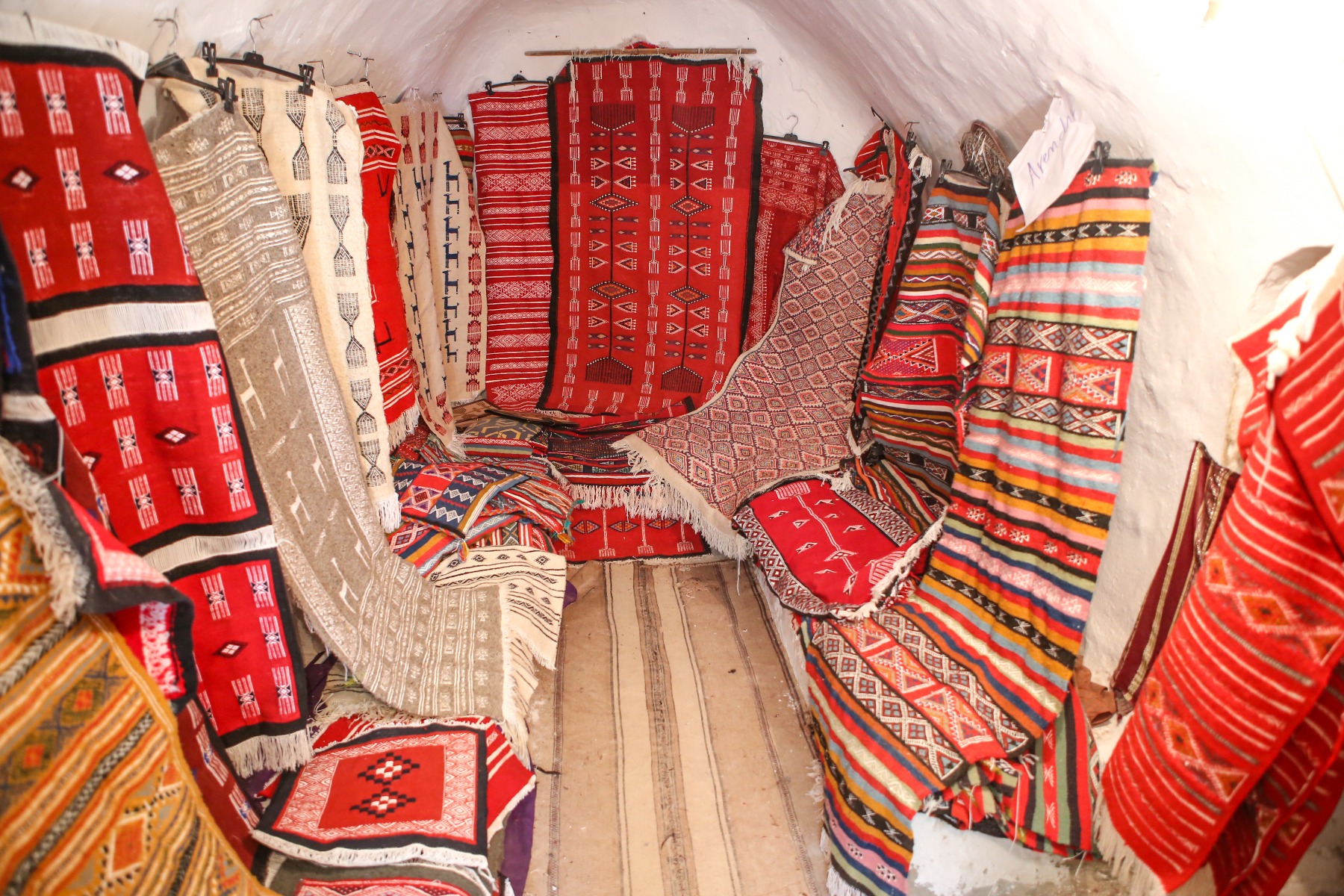 The production of rugs in Morocco is one of the most secular professions.

Currently, it constitutes a very important sector in the Craft industry and this on several levels: productivity, employment, and profitability. It remains the main product.

Improving the quality and performance of Tunisian artisanal rugs is a major asset and a necessity for reducing production costs, ensuring the durability of the rugs, and above all adapting to new scientific methods of characterization and classification to compete with mechanical mats.